Despite the latest OMP-AMIS release lying just three months in the past, the Agrisoft programmers have been extremely busy and the next version of the program is nearing completion. As usual, the upcoming release will combine the addition of new program features with bug fixes and other small improvements. The present article outlines a selection of the most important changes you can look forward to in the new version, which will carry version number 8.8.01.

A long-running development project that is nearing completion concerns the development of a version of OMP-GIS compatible with ESRI ArcGIS. Together with the existing OMP-GIS application for MapInfo, this means that OMP’s thematic mapping features can be used with the two most widely-used GIS programs in the world. OMP-GIS for ArcGIS will include most of the main features familiar from the MapInfo version, including menu-driven thematic mapping, support for adding layers, exporting and printing of maps as well as multi-map layouts.

Within the OMP-DBMS main program, we have aimed to round off the pest and disease reporting module introduced in version 8.7.03 by adding further relevant information to the data analysis forms and reports. With these additions, we feel that OMP’s pest and disease module is now ready to be an important tool both for yield gap analysis purposes and to investigate which planting materials and environmental conditions lead to blocks that are particularly vulnerable or resistant towards pest or disease attacks. In the OMP leaf analysis section we have added the possibility to record rachis magnesium levels, which have been recently shown to be highly relevant in the analysis of nutrient deficiencies and fertilizer recommendations. Rachis magnesium has also been added to the various leaf analysis forms, reports and charts.

In practice, data maintenance and data validity checks are amongst the most important tasks for OMP operators to regularly carry out, to help avoid incorrect management decisions being made due to wrong data recorded in OMP. To make this task easier, we have greatly expanded and improved the capabilities of the OMP Data Verification tool. With the new tool, users will be able to easily check for unrealistic or missing values of in various production-related quantities including yield, average bunch weight or harvester productivity. Besides production quantities the data verification tool also covers fertilizer application as well as various other block characteristics. Based on the criteria entered by the user, the data verification tool outputs an overview report showing which percentage of blocks fail which criteria as well as a detailed list of all blocks where data needs to be reviewed. 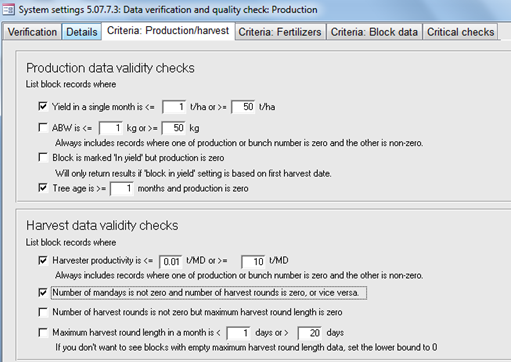 The capabilities of the OMP Harvest Round Recording (HRR) Add-In, which is used for detailed production reporting, have been extended with the addition of a new class of reports showing a comparison of actual and budgeted production. The new reports are available at weekly, fortnightly, 4-weekly (periodical) or monthly aggregation level, and allow managers to get a detailed view of how well they are on the way to meeting their production targets.

The new version 8.8.01 will also see major improvements to the OMP-SIS Add-In, which focuses on the management of oil palm smallholder areas. The entire yield and production reporting section of the add-in has been re-coded to achieve a significant speed increase compared to the previous version of the program. Furthermore, budget vs actual reports similar to those now built into the OMP-HRR Add-In have also been added to SIS on a fortnightly and monthly level. These reports will give plantation managers a quick overview of whether the smallholder areas are producing as expected, and whether the yield reported on a fortnightly basis by each smallholder is realistic or whether further investigation is needed.

Another new tool which we think will prove very helpful in the management of oil palm smallholder production is the new fruit pickup schedule module built into OMP-SIS. The revamped data entry system makes it easy to generate a pickup schedule based on an initial harvesting date and a planned harvest rotation length for each block in which public holidays and Sundays can be automatically excluded. It is possible at any time to reset the schedule for the coming months, for example if the pickup process has already fallen behind the schedule made at the beginning of the year and the manager wishes to restart the counting based on what the current harvesting dates are. The new features are complemented by a selection of data analysis forms and reports that allow managers to see how well the pickup schedule is being implemented. The screenshot below shows an example of such a report which displays information on which percentage of blocks is being picked up how many days late.

Estate statistics on variance between actual and scheduled pick-up days by fortnight.

The possibility of filtering globally is one of the most powerful data analysis features OMP. This feature has now been added and adapted to the case of the OMP-SIS Add-In. In addition to some of the usual filter fields familiar from the OMP-DBMS main program such as Division, Field, Year, Soil class etc., the OMP-SIS filter allows users to filter for specific farmer ID’s or smallholder groups. These filtering features will greatly help in particular with data analysis of farmer questionnaires of smallholder block data. Finally, the data analysis forms and reports showing the area distribution of smallholder areas by tree age or planting year have been improved.

Rounded budgets and data importing for crop budget and forecast

A new feature in the OMP Crop Budget Add-In is the option to work with rounded monthly production values in the budget. This option is intended for users who prefer to work with budgets of a round number of tons per month rather than directly using the result of multiplying the budgeted yield with monthly percentage and block size. This method is advantageous if users wish to compare or cross-correlate the OMP results with other budget calculations carried out with round monthly production budgets e.g. in MS Excel.

OMP-AMIS version 8.8.01 will make it possible to import data from Excel format in the OMP Crop Budget and OMP Crop Forecast (Black Bunch Count) Add-In programs, where no importing was possible so far. This is particularly useful in the case of the black bunch count add-in, where census data from a large number of blocks has to be recorded every month or every few months at the latest. Finally, as usual the new release will include a number of smaller bug fixes and tweaks to improve the user experience.